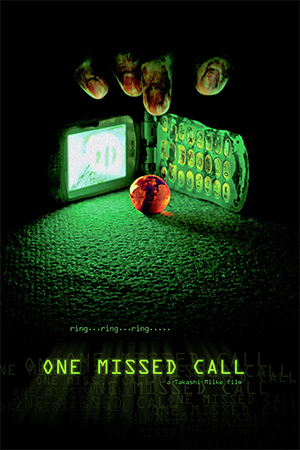 A  lullaby ringtone signals you have one missed call.  It’s the sound of your own death.  Two days later you’re dead.  As you die the message is passed on to one of your friends.

As ‘Ring’ xeroxes go, ‘One Missed Call’ does not seem to offer anything new to the rapidly overstuffed Asian sub-genre of vengeful vixens.  Even suppressing memories of ‘Ring’, the chain-letter like curse and intricately prophesised demises still invoke ‘Ju-on’.

But, whereas its influences suggested a world of violence just offscreen, ‘One Missed Call’ is a Takashi Miike film, its horrors depicted with an unflinching gaze.  And this full-blooded cruelty is what sets the film apart from its empty cash-in cousins.

Yasushi Akimoto and Minako Daira’s script follows the familiar trajectory of an innocent young woman, Yumi (Shibasaki), who must investigate the reasons for the spooky slayings before she falls victim to the curse, and is joined by a non-romantic male companion (Tsutsumi) with a personal interest in solving the mystery.

Fleshing out this well-worn story is a live-TV exorcism for one of Yumi’s friends (Fukiishi) and a child abuse subplot that sidesteps bad-taste to be truly disquieting.

With ‘One Missed Call’ Miike has been accused of making a commercially sure thing, but he cannot resist muddying the waters, especially as the film races toward the logic-twisting conclusion.  Those who bemoan Miike’s refusal to tell a straightforward story will feel cheated, but it’s a relief Japan’s chief enfant terrible applies his usual wilful vision to the wraith-revenge subgenre.

Plus, Miike, ably assisted by usual DP Hideo Yamamoto adds some new images to the Asian Hall of Horror, most memorably the vengeful spectre, hanging from the ceiling, advancing upside-down on an unaware Yumi.  Elsewhere, horror fans can enjoy rotting zombies (sorely underused in current Asian cinema) and one victim tearing her own head off.

In the lead, Shibasaki has the prerequisite wide-eyed innocence and inner-resourcefulness and is virtually unrecognisable as the psychopathic Mitsuko from ‘Battle Royale’, and Tsutsumi brings the intensity the male lead must have since Hiroyuki Sanada coined the role with ‘Ring’.  Ably filling out a background subplot is Miike-regular Ishibashi as a comically hardboiled detective.

Not a classic, but for those not yet bored by vengeful serial killing and familial mysteries, there is much to recommend here.