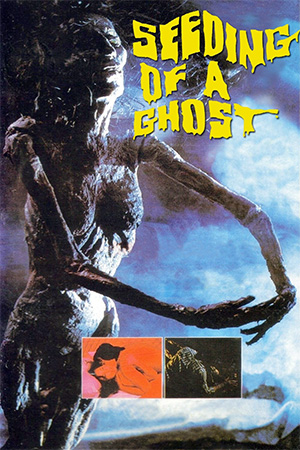 Heading home from a hectic night shift, taxi driver Chow (Phillip Ko Fei) is shocked when a stranger runs into the path of his vehicle. The stranger proves to be a shaman, on the run from neighbouring villagers whose ancestral cemetery he’s defiled. Whilst Chow ferries the sorcerer back to his rundown shanty, he is warned that their crossing paths can only lead to ill-fortune or death for the cabbie and/or his loved ones. Almost immediately the omen grinds into action when Chow’s wife, Irene (Maria Yuen), finds herself in a torrid affair with oily gambler Anthony Fong (Norman Chu) after the two come to mutual attention at the casino where she works.

But the idyllic dreams of a bored housewife are quickly dashed once Fong callously dumps her, in favour of his wealthy wife, and the resultant fracas leaves Irene stranded and alone in the outer suburbs. It also swiftly throws her at the mercy of a pair of violent youths, who terrorise her into an abandoned building before raping and murdering her. Once news of her fate reaches Chow, he is so overwhelmed with both shame and blinding rage that he immediately hunts down the shaman. Forcing the necromancer into promise of supernatural vengeance, Chow is given final warning that his revenge will be undeniably horrific, but also come at devastating cost to himself.

By the time ‘Seeding of a Ghost’ (1983) made its theatrical debut in the final moments of its release year production company, Shaw Brothers Studios, was already drawing up exit plans to shutter its feature film arm and focus its energies on the small-screen via their broadcaster, TVB (Television Broadcasts Limited). At that stage, the writing had been on the wall for some period. Major rival, Golden Harvest (itself borne of two former Shaw executives) had long since snatched domestic market share from their once dominant competitor, the New Wave movement had shifted audience attentions away from “old-fashioned” product, and a plethora of independent filmmakers had begun popping up and vying for their own piece of the box office pie.

An odd choice then, for a fading A-list studio turned latter-day B-movie factory, to commission a cheap imitator akin to ‘Seeding of Ghost’ (harkening back to the glory days of their seventies Southeast Asian shockers such as the ‘Black Magic’ films) to spar at the box office against the likes of Jackie Chan’s rising star or as lead-in to 1984’s Chinese New Year season. But that’s exactly what the Shaw’s did, so in retrospect it’s not exactly hard to figure out why the film had such a short two week run before disappearing into home video obscurity and ultimately embraced internationally by cult movie fans around the globe. However, just like Yeung Kuen’s completely forgettable supernatural thriller of the previous year, ‘Hell Has No Boundary’ (1982), ‘Seeding of a Ghost’ isn’t exactly what you’d call the highpoint of Hong Kong horror of its era; nor is it anywhere near the spurious accolade of being “the goriest Hong Kong movie ever made” as has it been overhyped for years.

Those expecting a rerun of early eighties shockers from the same period such as ‘The Imp’ (1981), ‘Devil Fetus’ (1983), ‘Possessed’ (1983) or ‘The Rape After’ (1984) are best advised to reign in their expectations considerably. ‘Seeding’ is (a large) part soft-core pornography, resplendent in gratuitous slow motion, abundant armpit hair and sleazy saxophone on the soundtrack, part hokey black magic rituals, part screwball comedy and ten minutes of finale ‘The Thing’-inspired splatter (albeit undoubtedly achieved on that film’s coffee budget). As with much of Yeung’s output over his career, from ‘Lucky Seven’ (1970) to ‘Bloody Beast’ (1994), story structure takes an awfully long time to get anywhere and when it does, proceedings are punctuated by a series of cobbled together vignettes before wrapping up in perfunctory fashion. There’s been the odd outing where Yeung has achieved a modicum of finesse, the later ‘Twisted Passion’ (1985) being a good example, but ‘Seeding of a Ghost’ never really excels beyond its threadbare, B-movie assembly line origins.

Admittedly, the eponymous ritual is undeniably the film’s highlight – a lurid combination of basic puppetry and cel animation – but apart from those few minutes and the blood-soaked climax (also saddled with some gooey but silly puppetry) there’s nothing much of outrageous consequence for genre fans of any background to get excited about. Some brains are gobbled up, some worms are thrown up, and a pair of pretty young things run about in the buff (all captured lovingly by ‘Corpse Mania’s cinematographer Li Hsin Yeh) but as far as comparisons with the greats of Shaw horror history? ‘Seeding of a Ghost’ is no ‘Ghost Eyes’ (1974), ‘Black Magic’ (1975), or even ‘Oily Maniac’ (1976) for that matter, and remains a tepid follow-up to Kuei Chih-Hung’s preceding black magic classics ‘Bewitched’ (1981) and ‘The Boxer’s Omen’ (1983). For the undemanding genre fan, or neophyte viewers just discovering Asian horror, ‘Seeding of a Ghost’ is that illustrious “beer & pizza” time waster that provides a taster of what else to expect. However, for those looking for something a little darker or outrageous, any of the other titles mentioned herein are arguably far better places to start, especially the aforementioned (and wildly superior) Kuei Chih-Hung black arts thrillers.