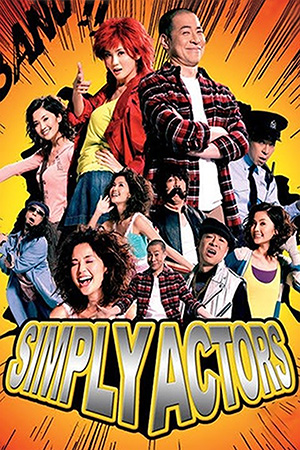 It’s a tough life being an undercover operative in Hong Kong, and even tougher when your slipshod façade is seen through as transparent enough by the gangs to end up dead with the critique “Crap acting” scrawled across your body in your own blood. Intent on avoiding further such embarrassment, goofball buffoon Chan Man Long (Jim Chim) is pulled from active duty and ushered into the Performance Arts Academy as a means for the force to keep their undercover officers alive. For Man Long, it’s a dream come true and for his peers, it’s a merciful reprieve to be rid of him for a while.

But his deepest wish to become an actor proves short-lived once he discovers that his abilities are far outweighed by his classmates. The appearance of soft-porn actress Dani Dan (Charlene Choi) buoys his spirits somewhat, as well as gives him an anchor in his studies and a friendship quickly sparks between the unlikely duo. Despondent in his job, as well as quietly acceptant that his long-time relationship with his partner (Michelle Ye) is on the rocks, will Chan take inspiration from Dani and find the courage to achieve his dreams and reinvigorate his career?

For Western viewers, the focal point of attraction or rejection with Chan Hing Kar and Patrick Leung’s latest comedy, ‘Simply Actors’, is going to lie on the shoulders of one man and that one man alone: Jim Chim. Whether one approaches this film at all will certainly lay within the viewer(s) acceptance (or tolerance) of Chim and oft-exhibited predilection for wild exaggeration and sometimes annoying overacting. If you didn’t like his over-the-top performances in ‘Mighty Baby’ (2002), ‘Good Times Bed Times’ (2003) and ‘Driving Miss Wealthy’ (2004), then you’re surely going want to avoid this film like the plague as Mr. Chim has been handed his very first solo leading role. And like virtually any of Chim’s prior supporting and cameos appearances, there’s overacting aplenty to savour in literal spades, which proves problematic as herein he’s the leading man and there’s no escaping his absurdist histrionics. Thankfully, Chan and Leung inject the very bubbly Charlene Choi into the mix early and her effervescent persona acts as a nice counterbalance to Chim’s larger than life performance.

However, there are two major flaws that prevent ‘Simply Actors’ from achieving more than it should. First and foremost is, with Chim’s (now expected) overplayed characterisation, the audience is left with an underdog whom they are hesitant to side with as it’s almost impossible to empathise with a character who is so downright obnoxious. Though Chim invests his character with some uncommon depth come the final act of the variety perhaps largely unseen outside of his domestic theatre performances, it’s a true struggle to see out his character’s narrative arc to its conclusion. Though I am no advocate of the Jim Chim school of overacting, there were passages throughout the film where I felt a comparative level of risible contempt mirrored by Eric Tsang’s acting teacher’s response to Chim’s varied attempts to oversell his part, where something resembling restraint might better have served the more poignant moments more suitably.

Secondly, the film itself is too long by far at just on two hours, and possibly would have benefited from a little more judicious editing that might have tightened its pace. As it stands, and though there are some amusing comedic set-pieces throughout (such as Chim and Choi’s humorous time on a soft-porn set or the finale’s elaborate set-up that requires the involvement of Chim’s entire drama class), come the mid-section and the resolution of Man Long’s relationship woes the film has begun to sluggishly drag its heels. When a couple of gangster-driven subplots are announced late in the story, it’s almost as if Chan and Leung became aware in the editing suite that their film had ground to a halt and needed an urgent shot of adrenaline.

Yet, inherent flaws aside, ‘Simply Actors’ represents a modest enough cinematic diversion, even superficially entertaining in passages, for modern Hong Kong cinema aficionados (who will undoubtedly delight in spotting the vast array of celebrities peppered throughout the film’s bloated running time). Like many contemporary commercial Hong Kong features the film is lushly photographed, bombastically scored, and filled with enough artifice to keep it at least moderately engaging whilst operating on the most peripheral of scripting decisions. Mind you, the near finale cameo by veteran Anthony Wong, as a Shakespeare reciting janitor, clearly defines the vast chasm of difference that separates some of the screen talent involved, as well as reaffirms the notion that, within the annals of Hong Kong cinema, even the greats are sometimes “simply actors”.