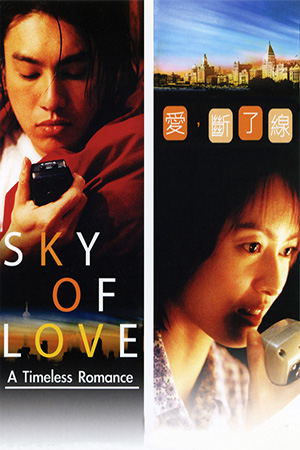 Drawing heavily on the excellent U.S. thriller ‘Frequency’, ‘Ditto’ is a romantic drama that uses the infinite possibilities of time travel in a very different way to its inspiration. Despite the change of direction though, it proved to be a big enough hit in Asia to inspire a Shanghai-set remake that shaves off twenty or so minutes, but retains nearly all of the same themes and characters. The only pertinent question when considering the two is which one is the more successful in blending romantic drama with elements more akin to science fiction. All will be revealed…

So-Eun (Xiao Jia in ‘Sky Of Love’) is a Seoul university student whose crush on a fellow academic leads her to fein an interest in a ham radio class. Landed with a temperamental piece of technology she doesn’t understand, So-Eun leaves it in her bedroom and forgets about it. One night while daydreaming about the man she loves, the young student hears a message on the radio and decides to answer. On the other end of the radio is fellow Seoul resident and pupil at the university Ji-in (Jia-Hui in ‘Sky Of Love’) and over the next couple of nights the pair start a tentative friendship. Gradually, though, both parties discover that there is a big chasm that separates the two: So-Eun is a student of 1979 Seoul whereas Ji-in is in the year 2000. Naturally this realisation is slow in coming as So-Eun and Ji-in initially think that the other is playing a trick on them. When they reconcile this surprising difference, the two use each other as a confidants and pour out their hearts over the airwaves. The one temptation for them both is to find a way to meet in the present – discussing such an event opens up an unexpected twist.

While it may be difficult to make a truly great film with time-travel as a central premise – the odd paradox or two certainly doesn’t help – it is just as challenging to completely waste such a fascinating concept. The idea of changing the past or the future has enchanted writers and film-makers for many years, so there it is unlikely that the curiosity value will diminish over the years. ‘Ditto’ is intriguing because it does not use the conceit to create an action thriller or sci-fi drama – it lets the fantasmagoria take a back seat to more mundane activities. ‘Ditto’ still manages to crank up a degree of tension through its later scenes, though director Kim Jeong-kwon is not attempting a remake of ‘Frequency’, but makes sure that this is essentially a drama with a Korean heart beating within it.

The central premise is so effective because, unlike many romantic dramas, the leading pair can never conceivably be together. Therefore ‘Ditto’ concentrates on the friendship between So-Eun and Ji-in and their reliance on each other as they battle their own personal problems. That’s not to say that there isn’t a typical Korean tenderness within; the unrequited love of So-Eun is effective in its quiet sadness, especially after the twist near the end. Nevertheless, ‘Ditto’ is a work that is reliant on the friendship that, while separated by over a decade, features two people whose feelings intertwine.

The obvious downside to the said detachment is that the viewer is left to follow a story that can never have a traditional denouement. Kim Jeong-kwon acknowledges this and gives us a particularly poignant pay-off that is well worth sitting through a somewhat overlong two hour running time to reach. Such a moment is successful thanks to its two stars who, though meeting face-to-face for barely a minute, develop a connection through the emotive dialogues they share. Charismatic actress Kim Ha-Neul is given the more challenging of the roles, but performs the various changes of mood with aplomb. Some may argue that the character of Ji-in isn’t nuanced enough to make a real impact on the story and while this may be true, Yu Ji-tae is accomplished enough for us to forgive these flaws.

In Teng Hua-Tao’s direct remake, ‘Sky Of Love’, Gigi Leung takes the lead role of the student who befriends someone living eleven years in the future. Stylistically, ‘Sky Of Love’ has that same easygoing ambience as its Korean inspiration while it also injects later scenes with a surprising amount of melancholy. Leung displays the doe-eyed vulnerability that she performs effortlessly and its use is especially necessary for her shy and fragile character. The one big advantage that her Korean counterpart has over her, though, is the matter of age and exposure. Leung had been acting for a good few years before this and had got such a variation of roles under her belt that it is more difficult to believe when she is playing a student. When put opposite relative newcomer Ken Zhu, Leung doesn’t seem as comfortable and there’s only so much her radiance can paper over this.

The two locations for ‘Ditto’ and ‘Sky Of Love’ – Seoul and Shanghai respectively – prove to be provident. Both cities have undergone such changes in the space of ten years that the differences between the eras the characters are in are well emphasised. Shanghai is arguably a better allegory for the gulf between Xiao Jia and Jia-Hui; few cities have changed in such a drastic way in a mere decade. Though the major changes to the city are never overly emphasised, Teng Hua-Tao makes sure that the modernity of the current Shanghai is clearly visible in the background while the slightly parochial city that surrounds Gigi Leung is never far from the frame. The city also benefits from some exquisite photography in its modern version, coming across in a far more attractive light than Seoul.

Though ‘Ditto’ is around twenty minutes longer than ‘Sky Of Love’, it is not noticeably slower in pace. Both films move at a leisurely pace – only occasionally stalling – and the former has a slightly prolonged running time to weave extra scenes of exposition into. The background relationships are given a little more room to breathe in ‘Ditto’, making the subtle emotional ending a tad more resonant. Both films share the effective closing shots that have a lingering sadness that re-asserts that noble quality of Asian cinema that makes the melancholy sympathetic without ever being melodramatic.

‘Ditto’ and ‘Sky Of Love’ are two romantic dramas with more to offer than the usual brood. On reflection, ‘Ditto’ remains the most successful in its execution despite an admirable attempt to remake it in ‘Sky Of Love’. The Korean hit makes ample use of the fine chemistry between its two main stars and the inherent interest generated by such a workable premise. ‘Ditto’ may be the better of the two overall, but ‘Sky Of Love’ is a remake that certainly does not embarrass the original.