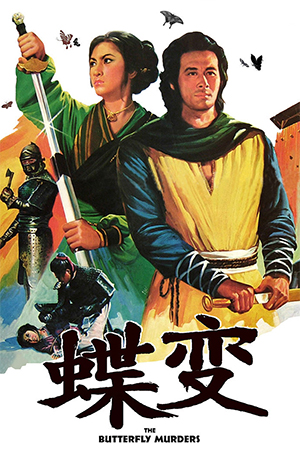 Tsui Hark’s hugely influential new-wave film, an inventive hybrid of various genres and ideas, has recently been re-released on DVD. Unfortunately, I was unaware of this when I bought the VCD a mere two months ago, therefore this review centres on the VCD version (not that my misfortune has any bearing on the mark I eventually gave the film).

Highly regarded scholar and travelling commentator Fong – who also serves as our narrator – finds his reputation on the line when forgeries of his works begin to trickle onto the open market. These works attributed to him apparently reveal various secrets about certain members of the warring clans that dominate China; such dramatic information leads to a series of murders connected to whoever owns them. Fong, however, finds a more pressing issue to be the reasons behind the disappearance of the clan inhabiting a deserted fortress and the mysterious arrival of swarms of deadly butterflies. While in the castle, Fong meets a few of the survivors and a few members of the Tien clan who have entered the fray to find out what has happened. The varied parties find themselves trapped in their new environment by the butterflies and spend their enforced stay trying to find out what has happened in the castle.

Though I have provided a brief over-view of the events in Hark’s work, ‘The Butterfly Murders’ is far more complicated and intriguing than its simple premise implies. With an apparent allusion to the multi-layered swordplay novels of Gu Long and Louis Cha, this is a story that revels in its twists and hidden motives. Western viewers will connect the film’s construction and characterisation to the kind of murder mysteries that Agatha Christie wrote, though Tsui Hark makes the revelations of the antagonists even more vague. Despite the rich body of work that ‘The Butterfly Murders’ has been inspired by, its fame is due to Tsui Hark’s ingenuity and invention rather than its narrative trappings; his strong visual style and delicate pacing are stamps of the auteur’s best work.

The major strength of the production is Tsui’s aforementioned qualities and an imposing setting that creates a truly disconcerting atmosphere. Few cinematic landscapes have exuded such an air of paranoia and desperation as Shum’s castle; every dimly-lit corridor and claustrophobic-inducing inch of the set design adds a further layer of interest. Tsui’s desire to set the majority of the action in this fear-inspiring series of catacombs and tunnels is one of the reasons that ‘The Butterfly Murders’ still proves to be powerful despite its problems. The mixed cast that combines old-school stars and newcomers also makes the most of its material and veiled characterisation – another winning staple of Tsui’s very best work.

While most of the commendation lauded upon Tsui’s work here is deserved, there’s obviously moments that show a director just starting out. The storyline’s invention is mostly impressive, but gradually, as the narrative progresses, the film loses its direction. Falling into the same traps that some of the more baffling Gu Long adaptations fall prey to, ‘The Butterfly Murders’ tends to leave too many plot strands for a 90 minute film to realistically tie-up. Some viewers can forgive this if the action is up to scratch, but that’s not really the case here. Tsui’s never intended this to be a martial arts masterpiece and it does show quite obviously – a fact that might not be to everyone’s satisfaction. As an indication of greater things to come though, ‘The Butterfly Murders’ is certainly recommended – just don’t expect one of his greats though.