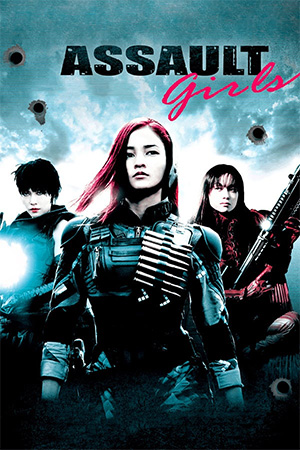 When a video-game company creates an immersive gaming environment where players wage war against gigantic sand-dwelling monsters, three girls take up the challenge. Gray (Meisa Kuroki), Lucifer (Rinko Kikuchi), and Colonel (Hinako Saeki) all possess very individual skills that have helped them to reach the highest levels of the game. However, when the final boss proves to be more than a match for any of them, they realise they will need to combine their talents if they are to have any hope of winning.

‘Assault Girls’ starts poorly, choosing to provide details on this new incarnation of Avalon (a virtual world created by Mamoru Oshii in his first movie) via an overly long and tedious monologue that struggles to maintain your attention. If you manage to resist the temptation to hit the off switch, your godlike patience is eventually rewarded with a mildly intriguing action sequence that sees a man with a big gun taking out a giant worm. Sadly though, this is about as good as it gets as this is really all that ‘Assault Girls’ has to offer. Clearly designed to play out like a live-action RPG, the film lacks any kind of meaningful story or character development, leaving the viewer with little more than four faceless characters fighting a big worm. Of course, this also means that there is a huge gap to fill before the final fight, and so Oshii forces the viewer to sit through an hour of lingering scenery shots or drawn out activities (like a man eating for several minutes) before the film finally limps towards its ultimately disappointing conclusion.

As far as the action sequences go, these are few and far between and regularly fail to live up to expectations. Most of the CGI is limited to say the least, and even though the girls sport some interesting outfits and equipment, they seem to do little more than fire a couple of shots before the enemy is defeated. To make matters worse, all of the main characters have an affinity for posing and aside from a few cheap thrills to be found in the ‘Challenge Aneka’ style rear views, these sequences seem to serve no purpose other than to fill up more time. Perhaps the worst element of all though is the dialogue as the majority of it is spoken in English which is a big mistake considering the actor’s poor grasp of the language. This means that any hope of emotion or acting ability is lost in the terrible recital of their lines and you spend half the movie just trying to decipher exactly what they are trying to say.

‘Assault Girls’ was an interesting idea but sadly the execution leaves a lot to be desired. Even though Oshii has an impressive eye for visuals, he really needs to invest more time into the overall package as this is sadly lacking in depth.