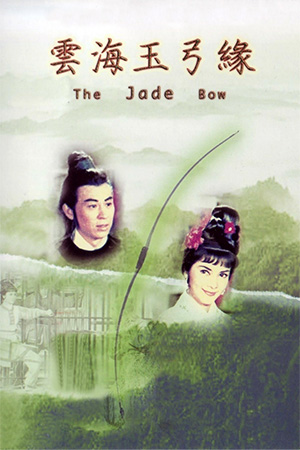 Made the same year as ‘Come Drink With Me’, ‘The Jade Bow’ is another film that ushered in a new era of more “realistic” wuxia  pien films, best represented by the Shaw Brothers classics.  While an enjoyable, spirited romp ‘The Jade Bow’ definitely plays second fiddle to its more illustrious contemporaries in both ambition and execution.

Notable for featuring action direction by Liu Chia-Liang (‘The 36th Chamber of Shaolin’, ‘Drunken Master II’), ‘The Jade Bow’ includes moments of well-realized action but looks dated and stilted even compared to ‘Come Drink With Me’ or ‘The Temple of the Red Lotus’ (which Lau had acted in a year previously).

Opening with a barrage of plot information, the story quickly settles down into family melodrama, albeit with smoke, mirrors and a smattering of wire-aided gravity defiance.

Upright young warrior King Shi Yi (Fu Qi) is ordered by his ailing master to defeat the evil tyrant Meng Sheng Tung (Wong).  Twenty years previously, King’s master watched Meng slay the owners of two volumes of martial arts techniques and make off with one of the books.  Meng’s wife was killed in the fight and his daughter was raised to be an enemy of her father, unaware of her parentage.  The books’ owners also had a daughter who was raised by her uncle to reap vengeance on Meng.  Two decades later and Meng’s daughter Ku Chi Hua (Ping) and the daughter of the books’ owners, Li Shen Nan (Chen) are fighting their own battles against Meng.  They come together through an affection for King, which leads to other problems when attempting to unite to confront the evil Meng.

‘The Jade Bow’ (referring to Shen Nan’s weapon of choice) is a colourful, spirited adventure story with comedy, action, unrequited passion and a bombastic score that owes as much to ‘The Adventures of Robin Hood’ as it does to traditional Chinese music.  But, while the film exudes a good- natured charm, it lacks the talent and spark that marked the contemporary Shaw Brothers films.

To modern eyes the action is noticeably quaint, with the three leads (none of them trained in martial arts) pulling punches and clearly being replaced by doubles for much of the swordplay.  During larger fight scenes the background action is under-directed, supporting actors repeating basic moves or even checking to see if the shot is over.  Special effects such as Meng’s smoking icy palm death grip and Shen Nan’s smoke bombs, combined with attractive pastel sets and vibrant costumes, better fit the tone of the film, and the wirework, though primitive by later standards, adequately physical ability just beyond the realm of possibility.

Pacing also belongs to a different age, with exposition filled conversation often grinding the film to a halt; directors Cheung and Fu clearly never heard the maxim “Don’t tell it, show it!”  They occasionally display an eye for composition, using a travelling camera to good effect when Shen Nan is attempting to poison Chi Hua, but much ‘The Jade Bow’ takes place in mid-shot or long shot hell, slowing the pace further.  Fu does not appear to have moved on to other projects of note, but Cheung was later responsible for ‘The Shaolin Temple’ (1982) and ‘The Kids from Shaolin’ (1984), two minor classics of the wuxia genre that launched Jet Li’s career.

The three leads, chosen because they were popular actors of the day, are likeable enough although Fu seems too old for his wide-eyed role.  Wong in particular enters the pantomime nature of the film with gusto, giving the film a memorable villain.

With the theme of familial tragedy and revenge, children raised in secret to battle tyrannical parents, and numerous rescues from lethally booby-trapped fortresses, ‘The Jade Bow’ bears a strong resemblance to a certain George Lucas space-opera.  But, as ‘The Jade Bow’ followed on and continued a long tradition of conventions, it probably features elements found in many Chinese adventure stories of the period rather than being a key source of inspiration.

Popular in its day ‘The Jade Bow’ now is more of historical interest for fans of wuxia pien, its thrills done bigger and better elsewhere.