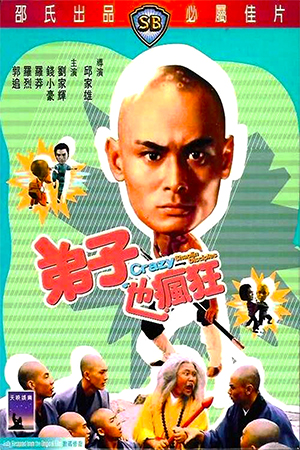 Back in 1985, it can only be assumed that Shaw Brothers couldn’t survive with all the other fresh (and often more polished/superior) competition from the likes of Golden Harvest (I know I seem very biased towards the latter) and they rightly backed out of the industry. It seemed like they reached a point where their productions were no longer accepted by a more contemporary-grown audience and they were forced to downsize into the TV market. They had their time in the industry though, and quite frankly I was getting tired of the cheap rubbish they kept churning out (some of which I sadly wasted my money on).

The Shaws made some great films without a doubt, but they did have some very inferior features too. These same films are often overrated on kung fu forums, with fans milking one positive attribute without serious consideration for the big picture, and they are unfairly compared to the superior (again) ‘Golden Harvest’. It didn’t help either, that the kung fu genre was no longer the film-trend and it was rarely utilised except in mainland China (like ‘South Shaolin Master 2’). Anyway, I won’t escalate a debate on the real reasons to why Shaws officially stopped in ’85 but in the meantime: a review for one of their final works (which could indeed be THE final feature).

With “His Royal Highness” stamping down on any anti-Ching movements, he orders the top chief and imperial guard Chik Len Ja (Lo Lieh), a highly excelled Kung Fu expert, to head after the Hung school (founded of course by Hung Hei Koon – played by Lo Meng). Prior to his arrival, two upstarts (Fong Sai Yuk and Hu Wei Gan – Wong Yu and Chin Siu-Ho) encounter this cunning man by accident and get involved in the latter’s vendetta. They also witness the murders of all the senior members of the school, except Hung who escapes although he leaves behind the school’s valuable medallion.

Soon realising that the medallion is most likely in the hands of the two sneaky young men, Hung quickly pays a visit to the Fong residence and demands his treasure be returned. Knowing that the two will inevitably face the wrath of Chief Chik, Hung and Sai Yuk’s step-mother insist they both join Shaolin Temple as secular disciples (simultaneously using it a cover-up for their reclusion). But before long, the Masters know of Hung’s true intentions and debate whether he should leave or remain living in the temple as a fellow Ming loyalist at the price of risking involvement in Hung’s affairs with the Chings.

Inevitably, Chik finds out Hung’s hiding place and Master Gai Hoi (Lee Hoi San) of the Northern section of the temple is wounded during an attempt to prevent the chief entering. This embroils an already-developed grudge between Hung and other students (namely the disciple monks in the ‘Northern’ section of the temple) even deeper. With their constant fretting between them, they are naturally forced to help each other when the Chief begins ambushing those residing with the temple…

It’s always slightly disconcerting when a movie doesn’t list a “main” star and that’s the first thing I noticed about ‘Crazy Shaolin Disciples’. Aside from the Celestial artwork, which headlines Gordon Liu, no-one is credited as being the lead and the film contains a mishmash of several characters. The trailer, for instance, follows the typical ‘Fan Ching Fook Ming’ (Rebel Ching – Restore Ming) struggle in Southern China with known folk-heroes like Tong Ching-Gun, the Fong and Hung families, Hu Wei Gan and, perhaps more famously, Wong Fei Hung, all fighting against the tyrannical Manchus. It all sounds exciting but what follows is a series of constant kiddy-giggling and not-too-easy-to-follow subplots (no thanks to fast-talking dialogue) which become really incoherent. It’s a shame really, as Yau seems to rely on this to string together what could have been a strong contender in the Shaw library. If you take out the confusion and a few other irritating antics, you’ve actually got the makings of a pretty entertaining actioner (courtesy of the magical ‘under-cranking’ button Shaws fell in love with during the ’80s).

‘Crazy Shaolin Disciples’ appears to be Yau’s only Shaw film, and it’s pretty easy to see why. He’s definitely not a director I’d favour compared to the likes of Lau Kar Leung or Chang Cheh. Of course, it doesn’t help that Wong Yu can’t fight so to cover this up one or two shots are filmed per-take and he is thrown around (a characteristic also found in ‘Dragon Lord’ with JC) which gets very annoying and boring/frustrating. Meanwhile, an aging Lo Lieh is constantly doubled while any other ‘worthy’ action is left to a bulky Lo Meng, Shaw regular Gordon Liu and (then) newcomer Chin Siu-Ho. Aside from the under-cranking, I have to admit that the action is well-done as it contains some dynamic choreography that delivers entertaining and fairly impressive results. It’s instantly clear that at least one of the influences is Peking Opera, particularly with all of the acrobatics.

While ‘Crazy Shaolin Disciples’ does have a few merits, I’d have to say that there is far better available elsewhere. I’d suggest you rent it first, although I’m sure many hardcore fans will end up picking it up regardless. You have been warned though!