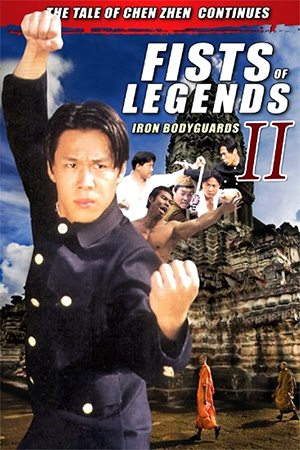 In a blatant attempt to cash in on the limited international success of the amazing ‘Fist of Legend’ starring Jet Li, new footage was shot with a look-alike (named Jet Le!) and incorporated into an old school flick to produce this inferior hybrid production.

Supposedly set after Chen faked his death in ‘FOL’, the film starts with a short re-creation of the original’s finale using the look-alike Jet. Once the scene has been set, the plot technically follows the attempt made by Dr Sun Yat Sen to make his way into China (Sun was a real life historical figure – and can also be seen in films like ‘OUATIC 2’). Chen is apparently involved in this attempted passage, but spends more time getting into random fights than furthering the loose story.

As mentioned, this is a cut’n’shut job pasting two films together – one film being a late ’70s old school flick, with the other being a collection of new Jet Le fight scenes. Le is never seen interacting with anyone from the other film, and as such appears to do very little except fight. This creates another problem, as one scene will be a modern styled and edited fight, with the others being typically old school, meaning that the film looks even more disjointed.

Action wise, there is much to enjoy. Some of the old school fights are enjoyable, with one in particular featuring a cameo from Bolo fighting a Bruce Lee look-alike! Some nice choreography and nunchaku fighting (from the Lee-alike) is on display and is both amusing and entertaining. The fight scenes featuring Jet Le are all quite good, particularly his friendly duel against a travelling Russian Boxer played by Todd Senafonte. Interestingly, Todd was Van Damme’s stunt double and displays the same prowess for doing the splits as Jean Claude himself. The fight scene in question is ironically better than any JC has ever been involved in himself!

This is, in all honestly, a very bad film. However, if it were purely being judged on the action, then it would easily gain 3 stars. Unfortunately, the incomprehensible storyline, dodgy integration of old and new footage along with all round tackiness means it can only manage 2. Bruce Lee, Jet Li and Van Damme look-alikes are all on display and make this an amusing, camp film which I recommend people to take a look at if it’s cheap. Bizarrely entertaining, but I suspect it will gather dust very quickly!