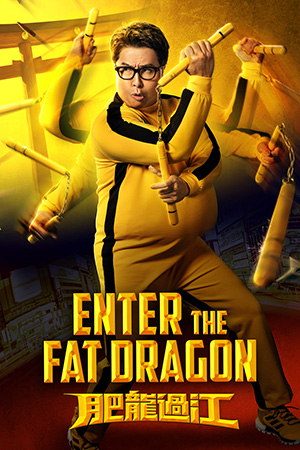 To discuss Donnie Yen’s latest film ‘Enter the Fat Dragon’, it is difficult not to compare it with two other films. The first is Sammo Hung’s 1978 classic of the same title, in which Hung imitates and pays tribute to the great, late Bruce Lee and impresses with his self-deprecating humour and incredible fighting skills. The second is Yen’s last film before ‘Enter the Fat Dragon’, i.e. ‘Ip Man 4’, which some initially felt would become an ‘unnecessary’ addition to the franchise; but after it was released, most people agreed that it is a memorable film to end the popular series. Sadly, the new ‘Enter the Fat Dragon’ lacks the humour and impressive fights of Sammo’s film; and is less necessary and memorable than ‘Ip Man 4’.

Interestingly, early reviews by professional critics were overwhelmingly positive and that might have been to the film’s detriment, since audience expectations were built to a level that it simply could not meet. It opened in Hong Kong during the Chinese New Year holidays, and disappointed at the box office. By the end of its theatrical run, it actually came last among the four local films that were released at the same time, being beaten by Dayo Wong’s ‘The Grand Grandmaster’, ‘All’s Well End’s Well 2020’ – the eighth installment in a tired franchise that started in 1992, and director Patrick Kong’s ‘You are the One’, a low budget film which stars a couple of young and rising actors.

Donnie Yen is an amazing fighter and charming actor, but in the film, donning a fat suit has not made his fight scenes any more amazing or acting any more charming. In fact, it turns out to be a shortcoming as many viewers will be wondering about the point of giving his character weight issues. Plus a clear oversight by the filmmakers is that when the character becomes fatter, his hands don’t seem to change. One dramatic scene sees Yen waving his hands in front of the camera, and audiences can clearly observe the same hands with the same slender fingers that the character had when he was not fat. The main actresses, Niki Chow and Teresa Mo, did their best with the material they were given. Young actor Lin Qiunan, a real-life Taekwondo champion, gets just one short scene to show off his magnificent fighting skills, and it would have been nice to see more of his action rather than that silly look of admiration he puts on every time he sees Yen’s character.

Most of the film’s jokes are lame and the plot would be familiar to those who have seen more than a couple of 80s’ Hong Kong movies. But the main reason for the film’s underwhelming reception might have been its executive producer, co-writer and co-star Wong Jing. Wong came to fame with his Hong Kong television shows and films, but after moving to the Mainland and achieving some success there, he started publicly commenting about the insignificance of the Hong Kong film market and industry, leading to much criticism from the Hong Kong public. In ‘Enter the Fat Dragon’, he plays the supporting actor with a performance that is not just unfunny, but is plainly embarrassing.

The last 30 minutes of the film save it from being a disaster by being genuinely entertaining and featuring a series of fun fight scenes. I just wish the whole film was like that, and I was certainly expecting a lot more from director Kenji Tanigaki, who previously choreographed the action in so many great films like ‘SPL’, ‘Wu Xia’ and ‘Rurouni Kenshin’. If you are a Donnie Yen fan, you should still check out ‘Enter the Fat Dragon’ to experience a different kind of Donnie. I hope you like it more than I do; but if you don’t, at least we can always revisit the superstar’s best films like ‘Ip Man’, or Sammo Hung’s original classic, to have a jolly good time.