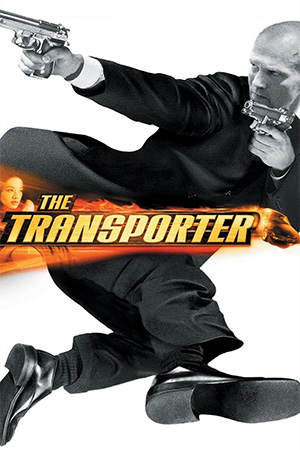 Retired from the Military and living in France, Jason Statham has put the skills learnt from his previous career to good use as a highly paid, highly respected “transporter” – a hired gun who simply moves any ‘package’ from A to B by whatever means necessary. He lives by three simple rules: Never change the deal, never mention names, and above all, never look in the package. Predictably, he breaks this final rule and as expected, all hell breaks loose.

By opening a ‘package’ containing the ever sumptuous Shu Qi in the boot of his car, their paths become crossed and he spends the rest of the movie rescuing her, avoiding being blown up and using some fancy footwork to see off his enemies. As plots go, it’s particularly threadbare, and the critical element surrounding the smuggling of Chinese immigrants is less than well utilised. Still, the point of this cinematic exercise was to fit as many car chases, explosions, shoot-outs and stylised fight sequences as possible into 90 minutes. To some extent it achieves this aim, but is not without its problems.

First of all, none of the key cast members are expert martial artists or stunt performers making any attempt to create something new in terms of fight choreography an immediate hindrance. Jason Statham, for all his impressive physique and flexibility doesn’t exactly look like Jet Li when performing the moves and wirework tricks needed. However, he is still a notch above what I was expecting from someone with no experience in this field, with some of his kicks and holds particularly good. Most of the fight scenes were too short to satisfy someone like me, and much of the fight action resembled that from ‘Romeo Must Die’ rather than a true HK-fight flick. What was particularly disappointing was the way in which the fights were filmed. The up-close/shaky camera/MTV-style shots were equally as evident as in other films such as ‘Kiss of the Dragon’ or ‘Blade 2’. However, since this was directed by none other than Yuen Kwai – one of the best action directors ever – the style used was surprising, and excessive, even if it was to cover up the actor’s physical limitations.

The car stunts, especially the chase that opens the film, were possibly the most impressive I have seen for a while. Expertly set up and executed, while edited to perfection fitting the music perfectly. I never used to be a fan of car chases, but the modern style as pioneered by the current French driving units is a joy to behold!

Aside from the physical performances, most of the acting appeared a little clichéd and stereotypical. Shu Qi was surprisingly the most impressive, and her grasp of the English language appeared as good as, if not better than, Jet Li or Jackie Chan. I expect we will be seeing more of her in the not too distant future. Unfortunately, Statham’s jilted US accent from the ‘The One’ reappears here, which is a shame, since the film is not set in America; there was no need for it.

All in all, this is a solid action flick that should appeal to those who enjoyed ‘Kiss of the Dragon’ and similar adrenaline-fuelled fare. Nothing extraordinary, and certainly not an exercise in thespian ability, but an enjoyable 90 minutes nonetheless. It also has an excuse for you guys to drag the girlfriend along to your local multiplex due to Jason Statham spending plenty of time with his shirt off!