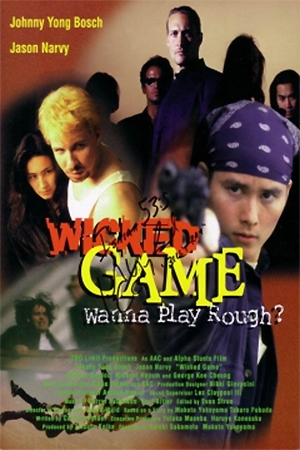 Mike Leeder of Impact magazine described this as “one of the best Hong Kong action films not to come out of Hong Kong”. A tough tag to live up to, but one not easily questioned given the struggle that has taken place in acquiring the video! However, it truly is an action junkie’s dream, even if it is the ‘Oscars’ nightmare!

There are only two reactions likely to be drawn from watching ‘Wicked Game’. The first being embarrassed laughter, coupled with the film being switched off after 10 minutes. The second being a wide grin at the imaginative, bone crunching action scenes that pepper the film, particularly the last twenty minutes. Koichi Sakamoto has ultimately come up with a low budget film to showcase the talents of Alpha Stunts and the AAC members, who would normally be pushed into the background of bigger budget films. Remember; these are the people who styled the action for American productions like ‘Blade’, ‘Drive’ and…’Power Rangers’!!! American productions are not renowned for quality fight scenes, but those movies clearly benefited from the stunt teams behind their action.

As a 90 minute experience, it is not up to the standard of ‘Drive’, as the actors clearly learnt their trade at the ‘Who Am I?’ academy, while the action sequences are generally no better than those in the superb Mark Dacascos beat ’em-up. However, those who enjoyed ‘Drive’, (and I thought it was wonderful!), will undoubtedly enjoy this too. The bone crunching fistfights, and the excellent parachute jump fight that ends the film (you read that right!) are worth owning this movie for. You certainly won’t rewind back to the start and watch it all again, but you will definitely flick back to some of the action scenes for a long time to come.

It is refreshing to see that the art of quality fight choreography is still being practiced, even if not in Hong Kong, and I would love to see what these guys could do with the budgets, time and respect afforded to the likes of Yuen Woo Ping and Corey Yuen Kwai. If you sit through the first half hour and aren’t sent crazy by the atrocious dialogue then you are in for a treat. Bosch is magnificent, and can really bust a move with some magnificent acrobatics, kicks and simple acts of bravery.

If you are fortunate enough to be within 500 miles of a copy, then track it down and watch it. It’s not Shakespeare. In fact, it’s less articulate than Coolio in ‘China Strike Force’, but you will be impressed with both the moves on display and the pain felt by the stunt team – (I’m pretty sure there’s no safe way to land directly on your head, or be forced to head butt a wooden roof by a speeding car!?).