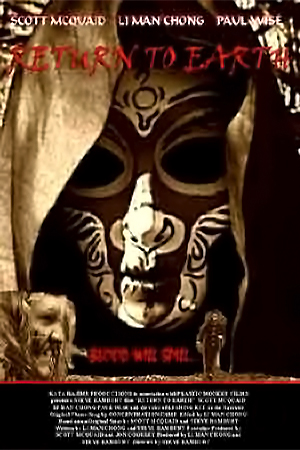 In this, their debut production, Kata Hajime have attempted to simultaneously break the mould of traditional kung fu films while hopefully creating a place for themselves in an increasingly crowded area of cinema.

In little over a year, an aspiration has developed into a fully fledged company showing great potential, and at last their hard work has been translated into something solid: ‘Return to Earth’. A 50-minute feature centred around the inner struggle of a lone warrior; filled with martial artistry and unusual images – ‘RTE’ is a fresh take on martial art filmmaking and a nice way of whetting one’s appetite for bigger and better things.

The film opens with the sight of Pakwa (Li Man Chong) walking a lonely path in search of a place to put himself to rest. We learn of his defeat to a savage warrior Gwai Lo, a man of little honour, and by way of redemption must commit the ultimate sacrifice. Before doing so, a mysterious figure emerges from the woods revealing himself as Seppuku, who challenges Pakwa to a duel to the death. Pakwa accepts the challenge, but must first defeat his nemesis, Gwai Lo, who wants Seppuku’s head as a trophy for himself.

During production of the film, Li suffered a severe injury to his eye. As a result, the script and storyline, which the team had worked so hard on, had to be swiftly re-written in order for the film to be completed. What follows is a twisting exercise in Martial art filmmaking the likes of which a British company has never previously attempted.

The look of the film is fairly simple, but refreshingly different. Instead of the bold, brash colours so closely associated with Hollywood and Hong Kong in the 21st century, we are met with a sepia toned forest environment. The costumes are traditional – and to a certain degree stereotypical – fitting the characters perfectly. There is a definite student film look to it all, but having seen more than my fair share of student films, many differences are clear. Firstly, the director allows touches of special effects and camera tricks to enhance what we see on screen without overly relying on them to the detriment of the story. On such a minimal budget, Hollywood style effects are never going to appear, but those that do are smoothly integrated and stylishly shot. Also, there is as much emphasis as possible in such a short time on characterisation. The personalities of all three characters come through very quickly, and one immediately empathises with Pakwa while simultaneously despising Gwai Lo. Seppuku captures the mysterious, noble edge his character is supposed to portray.

For a martial arts film, it is the execution of technique that suffers when compared to the big budget productions we are accustomed to. Although by no means flush with cash, 80’s all-action Jade Screen vehicles such as ‘Dragons Forever’ and ‘Righting Wrongs’ had honed martial arts choreography, editing and camera positioning down to a ‘T’ and the cash behind them was what allowed the time to do it. Kata Hajime, in their first ever outing, had little time and no money. Scott McQuaid acting as performer and choreographer displayed a clear ability with his fluid movements and generally tight execution. On the other hand, Li (perhaps due to the injury) had little chance to impress, while Paul Wise as Gwai Lo performed in the true style of his character – slow and powerful but unexciting. The extended fight sequence that closes the film does have some genuinely good moments – all courtesy of McQuaid – and underlines the potential on offer if they could enlist some more true martial artists and find the time to work together. The follow up feature ‘Return to Earth 2: Shades of Myth’ promises just this and should improve on the action sequences exponentially.

The editing of fights in Kung fu films is often a source of annoyance to me, especially when Hollywood try their hand at the genre. Fortunately, here Li takes a sensible approach and allows sequences to flow where possible, but integrating cuts and “double-takes” where appropriate, and as a result achieves maximum results. It is clear that with experience, time and not to mention the cash, we have much to look forward to.

In essence, this is a stepping-stone to what should hopefully become a flourishing company, and provide valuable experience for their future productions. This venture was constantly entertaining, and providing the potential becomes reality, should prove a very worthwhile experience. I wish them nothing but the greatest of fortunes.