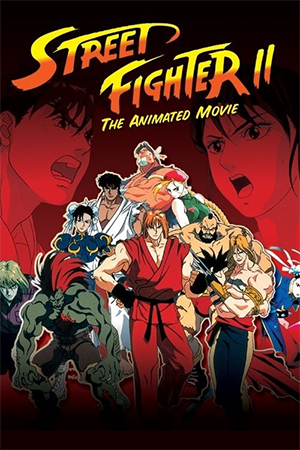 With the long-awaited ‘Street Fighter IV’ hitting home consoles this weekend, I thought it would be fun to take a look back at some of the cinematic conversions of the world’s finest fighters. Quite frankly, I didn’t have the strength to sit through the Jean Claude Van-Damme live-action effort, so I thought I would start out with this early 90s anime outing.

Vega (or M. Bison as we all know him in the West) is the ruthless leader of the international terrorist organisation Shadowlaw. Although he is rich and controls vast amounts of the globe, he spends his time searching for the world’s greatest fighters to use in his diabolical schemes. When he comes across a young wanderer by the name of Ryu, he realises that he has found a potential candidate for the strongest man of all time. However, he knows that Ryu will never willingly join his organisation so he decides his best form of attack is to go after his childhood friend and fellow student, Ken Masters. Meanwhile, Major Guile of the United States Army is forced to team up with Chun Li from China in the hope of apprehending Vega and putting a stop his international ring of crime.

The first and most obvious positive to be taken from ‘Street Fighter II: The Animated movie’ is that it is… well, animated. Unlike its dire live-action counterpart, the use of animation makes it far easier to recreate the look and feel of the video game, which it does particularly well with accurately drawn characters and a few familiar backgrounds. Likewise, the lack of physical actors provides the added freedom of being able to include as many of the fighters as possible, with even the likes of T-Hawk and DeeJay making some kind of appearance. To round it all off, the writers sensibly choose to give each of the characters their original background stories and then employ a solid selection of Japanese voice talent to recreate all of our favourite sounds and quotes. So far so good, right?

Despite all these merits though, even my misty-eyed fanboy perspective could do little to disguise the fact that the film suffers badly in the story department. The real problem here is that the creators clearly wanted to include as many of the characters as possible so the movie noticeably struggles to establish a solid narrative. This is particularly evident in the opening half an hour where the film seems to jump from location to location and just feels like a string of random confrontations. Another negative is the soundtrack, or lack of it, as there are often long and very awkward silences during scenes where there should really be background music. This may not sound like something too serious, but the lack of a soundtrack during the (supposedly) adrenaline fuelled action scenes really lessens the impact.

Much like the rest of the film, the action on display also provides something of a mixed bag. As the movie opens, we are treated to an exciting and well-shot battle between Ryu and Sagat that includes some nice combinations and lasts a decent amount of time. Unfortunately though, this is rarely improved upon and the majority of fights consist of nothing more than a few punches and kicks followed by a special move that ends it all. In truth, it really isn’t until the finale that we eventually get to see another strong bout as Ryu and Ken go up against the fearsome Vega. However, even this is spoilt somewhat by the use of one of the worst pop themes ever that seems completely out of place for such a climactic scene.

So, is this the perfect adaptation of one of the biggest and most popular video game franchises of all time? Personally, I’d have to say no as even though the flick looks the part and is fun for fans, it just never seems to be as exciting as it could and should of been.