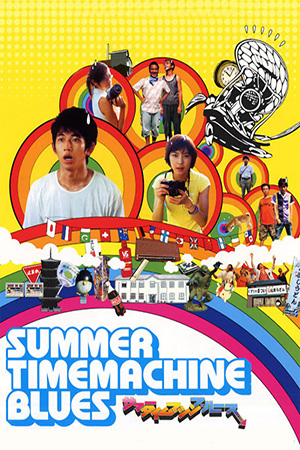 The Producers of ‘Swing Girls’ hit the mark again with this nostalgic, funny and thoroughly inventive mix of school-day nostalgia and bonkers science fiction. Based on a popular stage play and featuring the well honed performances of many of the original actors, ‘STMB’ is easily the funniest Japanese film I have seen all year. After an accident with a bottle of cola destroys the remote to their air conditioner – halting their ability to turn it on, the members of an after school sci-fi club (who incidentally know nothing about science fiction) are amazed to find a time machine just sitting in the middle of their classroom one afternoon. After a bit of a laugh, they are amazed to find that it works too! You’d be forgiven to think they might now go on the adventure of a lifetime, watching the dinosaurs die out or seeing if cars really do fly in the future. These kids have a plan though. They’re going to travel back in time one day into their past and stop the air conditioner remote ever getting broken. What at first seems like the simplest of tasks soon turns into a desperate race against time to stop the fabric of space from tearing itself apart: destroying the universe and everything and everyone the boys have ever known.

Directed by Katsuyuki Motohiro who was also responsible for the ace ‘Bayside Shakedown’ movies, ‘Summer Time Machine Blues’ is at once a fresh and familiar take on the time travel genre. Its freshness comes in the form of a sarcastic wit which permeates the entire two hours. Yet when all’s said and done, the fate of the world really does hang in the balance and what’s really neat is that there isn’t some ‘Back To The Future’ style epic mission to accomplish. The entire film takes place in and around the grounds of the school, and every beat and moment adds up to a bigger picture. In fact the realistic continuity is one of the defining factors of the picture, and it will certainly warrant repeat viewings just to see, for instance, a flash of light signifying the time machine being used, or the children watching the day old versions of themselves from the corner of the frame. The narrative has a sharp and snappy structure and stays focused on the important, albeit silly idea that the children just want their air conditioning back. It’s hot in sci-fi 101.

As mentioned before, the cast is mostly occupied by the actors who portrayed these roles on stage, and it shows. Eita Nagayama (‘Memories Of Matsuko’) plays Takuma, straight man to his merry bunch of oddly likeable friends. Much of the comedy kind of ‘happens’ to him, whereas the rest of the gang actually create comedy. He’s a sensitive sort of character who seems vulnerable and real, even amongst the bizarre shenanigans which ensue, and Nagayama certainly deserves credit in creating sympathy. The added bonus of the film for me was Juri Ueno’s (‘Swing Girls’) Haruka who is a seemingly unreachable love interest for Takuma. His ongoing attempts to ask her on a date to the cinema give the film a romantic kick, and lead to a whimsical but sobering end which may just shock and surprise you.

Visually the film is marvellous, and it is here that I usually find a lot of modern Japanese cinema lacking. The sweltering heat can be seen and almost felt in each and every scene, which helps in creating a sense of desperation. Costumes and production design are both suitably bright and colourful and the special effects are of an incredible standard, but they never overshadow the heart of the story. Laughs come thick and fast and Katsuyuki Motohiro’s trademark measured plot but punchy pacing are once again in full force, revealing detail upon detail until the overall story takes a satisfying shape. Along the way there are references to everything from HG wells to ‘Back To The Future’. Fun digs at ‘Star Trek’ and a fair bit of nostalgic video game history. Nearly every scene is ended with a commodore 64 style jingle.

I can’t say enough about how fresh, fun and vibrant this film feels. It takes the staples of the time travel genre and spins them in unexpected, humorous and at times even sad directions. The cast are uniformly excellent and the director seems to be happy to take risks and most importantly treats his audience with respect: there are no gaping plot holes ala ‘Returner’ in this one. I’m happy to have taken the plunge with ‘STMB’ and I advise anyone with a funnybone who isn’t allergic to science fiction to check it out. After the ‘Bayside Shakedown’ movies, this marks director Katsuyuki Motohiro out to be one to watch, and a possible future leading light of the Japanese film industry.