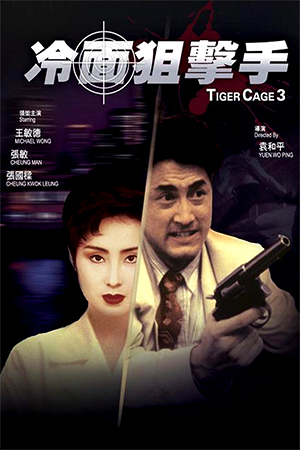 Tiger Cage 1 and 2 are possibly some of the finest modern day actioners and brought to a close Hong Kong’s 80’s action heyday. Part 3 was released in 1991, and completes a trilogy related only by name and director.

The plot revolves around 2 cops: James (Cheung) and John (Wong) who are on the case of shady business dealings involving the boss of James’ girlfriend Suki (Cheung Man). John uses his knowledge of the investigation to further his stock market dealings and eventually comes unstuck when the boss is arrested and he loses all his money. Meanwhile, Suki is kidnapped, due to her involvement on both sides, and James goes to her rescue, ending up badly beaten and left for dead after an explosion. He survives but is left badly scarred. The storyline then meanders around various double-crossings leading to increasingly brutal physical encounters.

The absence of Donnie Yen clearly hurts the film, as his physical skills coupled with long-time cohorts Michael Woods, John Salvitti etc… made the action unique and exhilarating – particularly in part 2. Here, Woo Ping brings in Cheung Kwok-Leung as the main fighting star and brings the best out of him. It is easily on a par with part 1 in the action stakes showcasing typically excellent grounded choreography. Only Michael Wong cannot be made to look like a real fighter, as previously confirmed in the superior ‘In The Line Of Duty 4’. Nevertheless, the action sequences are all above average, and particularly brutal, as is to be expected from a Tiger Cage film.

Ultimately, this is equal to – or better – than part 1 for the action, but not the drama, yet is certainly not the equal of part 2 for fight scenes. As a result, it is a welcome addition to the series without offering anything new. If you liked films such as ‘In the Line of Duty 4’ or ‘Tiger Cage’ then this is definitely for you. If not, this is no improvement, so you would be better off looking elsewhere!!