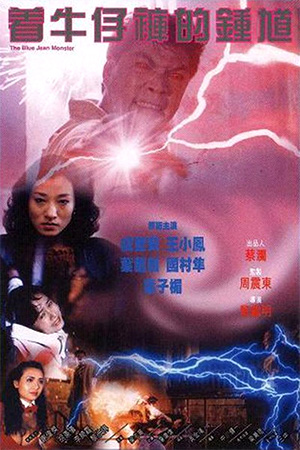 1991’s ‘The Blue Jean Monster’ is a riotous Hong Kong action bad taste comedy, sort of like ‘Pantyhose Hero’ but wearing a Halloween costume. It stars the late, great Shing Fui-On star of a million movies, but the lead of only one, ‘The Blue Jean Monster’. If anything sums up the strengths of this great Hong Kong character player, it’s this film. Like Lam Suet today, Shing Fui-On was as adept at playing heavies as he was doing comedy.

In 1988’s ‘Final Justice’, he has a great turn as a robber and in bit parts such as ‘Tiger On The Beat’, he shone as a put upon husband, acting as a great comedic foil to Chow Yun-Fat’s randy cop in one nice little sequence. ‘The Blue Jean Monster’ is a distillation of his talents, and it’s a shame he didn’t get more lead roles, as he is the best thing about it.

In ‘The Blue Jean Monster’ Shing Fui-On is Tsu, a haggered cop with a pregnant wife Chu played by Pauline Wong (‘Mr Vampire’s Fox Spirit) and a young punk housemate called Power Steering, an annoying character that Tsu looks after as he blew away his father years ago. Tsu, through Power Steering, learns about a bank robbery and eats up dead in a junkyard for his troubles.

Reincarnated through the wonders of cat urine and lightning, Tsu becomes a super strong zombie who needs constant recharges of electricity to survive, he swears to have his vengeance upon the robbers and see his son born.

Tsu finds himself invulnerable but also intolerant to sunlight and unable to eat or smell. In fact anything he eats pops back out of a hole he has in his belly. Tsu goes through sanitary pad and cookie dough to plug the gaping hole. Power Steering has some unfortunate encounters with what passes through Tsu in some memorable OTT moments that you only get in a Hong Kong movie.

The action and supernatural element aside, ‘The Blue Jean Monster’ plays out like a bawdy 70s sex comedy, much of the middle section is devoted to Tsu and his wife’s suspicion that he’s either gay or having an affair. Cue yelling , bad gags involving  exploding boobs  and questionable theories about sex whilst heavily pregnant. All this whilst Tsu walks around as a befuddled super strong undead copper!

The strength of Shing Fui-On’s delivery is what saves ‘The Blue Jean Monster’, he has a natural grasp of the comedy and the screen presence in the action sequences. For what is essentially a monster comedy , this film has great action. There’s a violent robbery at the start, followed by a cracking car chase, then a tense shoot out in an old building followed by the final crackerjack finale involving firearms, tools and moving vehicles.

‘The Blue Jean Monster’ is very odd, with mood swings at the drop of a hat. Much of the players do not have much to offer and most have little to their name outside of this film. Power Steering is a bargain basement Andy Lau and his girlfriend, Gucci is the sort of hysterical Hong Kong actress that can shatter glass. Without Pauline Wong’s performance as Chu, the film would probably sink but he and Tsu have a believable relationship and that carries the film from its start to the end.

I wouldn’t have ever thought it, and unlike a similar movie such as ‘Magic Cop’ which is just good fun, ‘The Blue Jean Monster’ has a little soul and pathos lurking at the heart of its rampant Hong Kong chaos. As a testament to the skills of one of those underrated wheels that kept the great Hong Kong movie train rolling in its hey day you probably couldn’t ask for a better memorial.