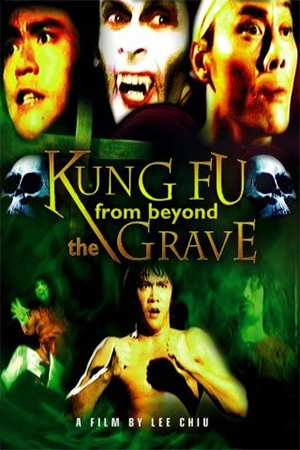 The over used kung fu revenge story is given a slight twist here with some fantasy/horror shenanigans.

Chun Sing (Chong) is visited by his deceased father, as a zombie, one night and told that he was murdered. He reveals that the murderer was Kam Tai Fu (Lo Lieh) and that Chun Sing must avenge his death. Chun travels to the village where Kam lives and confronts him but discovers that Kam is protected by an evil sorcerer. Chun Sing must find a way to defeat the sorcerer and take his revenge.

Although billed as a kung fu horror there aren’t any scares contained in the film. The closest any scene gets to being frightening is when Chun and his friends are attacked by a zombie at a burial site. Any horror possibilities are ruined somewhat by the fact that Chun spends most of the scene chatting to the bones of his dead father (who’s talking back) and some slightly comical special effects. The low production values mean that the special effects used during the film aren’t really that special. The effects include some dodgy wirework and some graphical effects that look like they could’ve been programmed on a Commodore 64.

Ok, so this movie isn’t going to leave you a terrified, jibbering wreck that’s curled up in the corner of the room calling for your mommy but could it be goofy enough to be some good, camp fun. Not really. It lacks the flair and inventiveness needed to make it a spectacle of insanity. So much so that a battle between Billy, the sorcerer, two ghouls with three foot long tongues, half a dozen zombie assassins and Dracula turns out to be rather boring. Sure, it looks good on paper but it just doesn’t deliver in outrageousness.

One area of the movie that does deliver is in the frequent fights. Billy Chong is a good lead and can certainly ‘bust a move’. He is ably supported in the action stakes by many of his fellow cast members, most notably Dai Sai Aan who, when he’s not mugging wildly while casting spells, presents a serious test for the skills of our hero. The choreography is crisp, well paced and offers the only really consistently good parts of the film. The 3 on 1 fight towards the end is the action highlight and also contains the best line of dialogue in the whole film, which i wont spoil for you here. Although i will say that I’m a little baffled as to why the sorcerer’s defeat is triggered by a barrage of flannels (lady flannels?). Maybe a little knowledge of Chinese mythology would’ve helped me out with that one.

In the end, ‘Kung Fu From Beyond The Grave’ is decent entertainment – mainly due to the fights – but lacks the campy charm needed to make it a strong recommendation.