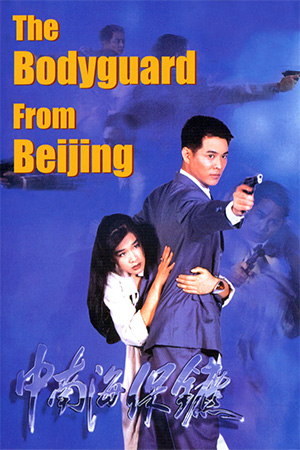 Hyped as a remake of the American film ‘The Bodyguard’, this clumsy and incompetent movie only results in disappointment (even without the plot similarities).

Top bodyguard graduate from Beijing, Hui Ching Yang (Jet Li) is sent to Hong Kong to protect a murder witness – Michelle Yeung (Christy Chung), the spoiled girlfriend of a wealthy business tycoon. Initially there are 3 witnesses, but 2 are eventually “taken care of” leaving Michelle as the only one left (with pure luck). Whilst at first she is frustrated by Yang’s invasive methods to protect her, it pays off after she is whisked away from a crowded shopping centre full of assassins. Feeling guilty about doubting him, it’s not before long that she gets closer to him emotionally. Unfortunately, one of the assassins killed by Ching Yang during the mall-rescue is the brother of a retired solider (also contracted to kill Michelle) whose intentions to get both of them are beyond just the ridding of a witness.

This film, alongside ‘New Legend of Shaolin’, sees Jet Li applying a ‘lone warrior’-like characteristic to his performance to display his serious outlook. Quite simply, he will always look good for a movie (always has done), but it just depends on whether his on-screen partner(s) will do the same. Sadly, that isn’t exactly what we get in ‘Bodyguard From Beijing’. Christy comes across as a sexy lead and she has the ability to display some convincing acting but unfortunately poor direction (trying on a silly wooing act which lingers too long for instance) plays a big part in creating several awkward, silly and cringeworthy situations. As for the other two actors, they have noticeably rather uninteresting supporting roles and the screenplay lets them down just when things look promising.

I think ultimately, this was a bad combination as multiple talents have been dumped on a contracted production. Kent can display some good acting ability but not really here. He simply isn’t suited to the bizarre mix of genres and gets relegated to a slob with the silly gambling/drinking-buddy antics with Joey Leung (the two play HK cops also assigned to protect Michelle locally). You would think that someone as talented as Corey Yuen could have come up with something that would have benefited the main concept better.

Action-wise, Collin Chou displays some interesting baton tricks whilst Jet works with a gun. Otherwise, this is a stinker as the (nearly) un-armed finale left me feeling underwhelmed by the incredibly disappointing choreography, where Jet attacks with slapping hands as if they were in some kind of bitch fight! This is probably the worst action we’ve seen from Corey, and Yuen Tak for that matter.

And last but not least, I couldn’t help but notice the superfluous final scene at the end – Ching Yang standing with a Chinese flag waving behind him. Maybe save it for a war film or something…

‘The Bodyguard From Beijing’ had the potential to be remembered as a classic action film, but Corey Yuen has failed miserably compared to his other wonderful classics. Definitely one for enthusiasts only.