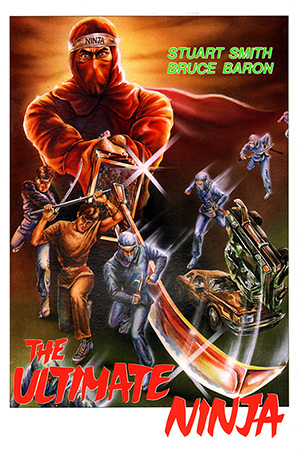 A twenty-year-old feud between Ronald, a village leader, and Roger, an evil tyrant, leaves Ronald dead and Roger running the village with his band of thugs. After his death, Ronald’s three children are split up and the eldest, Jimmy goes into training to exact revenge on his father’s killer. Meanwhile, an evil Ninja leader by the name of Victor has stolen the Black Ninja statuette from Charles, the new leader of the Red Ninjas. Charles sets out to recapture the statuette and prevent Victor from obtaining the sacred Golden Ninja Warrior.

After the standard introductory sequence that sets up the rivalry between the Western ninjas, ‘The Ultimate Ninja’ spends the majority of its running time on the other spliced-in feature. As is often the case with IFD productions, it’s a typically weak affair that is made all the more confusing by Godfrey Ho’s random dialogue and vague attempts at creating a story. The usual ninja confrontations are of course inserted to try and keep the audience awake, but on this particular occasion even the over-familiar clichés seem to do little to amuse. It also has to be said that even though he sports a mean moustache, Bruce Baron feels like a poor substitute for the legendary Richard Harrison.

On the action front, ‘The Ultimate Ninja’ is clearly packed full of fight scenes but unfortunately quantity doesn’t make up for the lack of quality. Strangely it’s the Ninja duels that are actually the most disappointing, as they are over far too quickly and rarely make good use of the weaponry at their disposal. The fights from the other feature/s hardly fair much better, but they do at least make some attempt to demonstrate minor ability in the martial arts. However, it’s fair to say that none of them really leave a lasting impression and you’ll probably find your attention wandering way before the half way mark.

‘The Ultimate Ninja’ is definitely one of the weaker IFD outings. The film is sorely lacking in both ninja action and cheese, with Godfrey Ho seeming lazier than ever when it comes to pasting the whole sloppy mess together.